- This is the first production batch after significant testing with over a hundred already out there.

- Please look at the product pictures for assembly guidance.

- Brain3D has GoPro mounts already designed for this frame. We will have them soon.

Vibrational noise and resonance have always been an issue for high powered FPV crafts....or have they? The truth is that our flight code today is incredibly good at dealing with a very wide variety of issues and that has made building and maintaining a fleet very manageable. That being said, there is still something to be gained from a craft that does a better job of managing resonance. It won't magically make your quad fly perfectly but you will usually be able to do a better job tuning with little or zero effort.

What we've done here, from a basic standpoint, is taken the extremely well tested and popular construction language of our past designs and worked on a new arm structure that is durable, cost effective to manufacture and manages vibrations better. No frame structure out there can take care of ALL vibrational issues but this is significantly better than more traditional frame structures.

Finite element analysis (those colorful computer simulations) has been helpful to better visualize and understand how to improve structural design but they only go so far. In the real world, every component on the quad has it's own resonance frequency. Even on a perfect frame structure, there will still be plenty of vibrational noise for the flight code to manage.

The primary goal of this design, on top of everything we've done in the past, is to provide a more reliable build. We have shipped more than 30,000 frames over the past eight years and noted feedback from thousands of users. Common issues become painfully obvious with that kind of volume. One of the less common issues is vibrational complications coupled with electronic noise that make managing a build frustrating. Eliminating that issue is what we mean when we say a 'more reliable' build. If you build 10 of the same quad, we want them all to fly more or less the same (if you're less experienced, two of the same quad don't always fly the same).

What you'll find is that this frame has no significant resonance frequency below ~250hz. As stated above, this does not mean you won't get any resonance below that, it just means that it's very unlikely to be coming from the frame. Extensive real world testing has shown that minor frequencies above ~200hz don't tend to play into flight control much unless they are extremely intense and wide bands which would imply there's something else wrong with the quad.

Regardless of the frame, applying damping grease at least between the arms and the main deck of the frame is strongly recommended. This will bring out the best performance in your quad with as minimal effort as possible.

Furthermore, the arms of this structure use a custom layup of carbon to better work with the two piece 'A' arm strut structure. In the past, various layups have been considered but after some testing, they were found not to have much improvement at all and were just more expensive. In these arms, we've traded ALL the 90deg sheets for 45deg sheets. The carbon engineers said this wouldn't work because the tension on the sheet would make the entire sheet bow. They were right about that and it did bow just a bit but it still works for this specific design because each strut is so skinny it doesn't matter. This custom carbon improved the vibrational performance by ~6-8% but also made the arms stronger so it was worth keeping. Also, the arm strut design is so efficient to manufacture that the increased cost of the custom carbon is managed. It also makes it especially cost effective to replace just half an arm if you crack off one of the toes in the front. (We're not fans of TPU arm shoes)

Like it, seems pretty tough. Cracked one arm so far, nothing else. Mine has a pretty significant resonance at 267Hz but besides that it seems like a really good one 👍

Nice frame. I have only flown it a handful of times, and it flies very well. Durability seems to be good, haven't really crashed it so that remains to be seen. Carbon is excellent quality. The design is quite clever with the 2 piece arms. I do wish that I could run a full size 30x30 esc though. I am using a iflight beast 55amp aio board, and just not sure how it will hold up to 6s in the long run would prefer the 30x30 option. Besides that I am very happy with the frame as I am with all Fpvcycle products.

Easy build. Used the same Electronics from another build and same dump file. X4 got rid of the little prop wash that I had from the other frame. Great experience with it from the maiden flight has sold me on the frame. 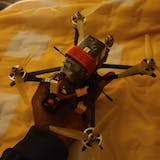 C
Chris Taylor (Alexandria, US)
Extremely delighted with the performance

This quad frame has been an absolute performer. Right off the bench I could tell the frame just flew really well, my experience had been nothing but positive and consider it my go to for freestyle.
It’s not going to take an extreme pounding and I fly it with respect over soft ground and enjoy a level of control and performance I just had bet seen up tmto this point. I’m ready for the production of third frame and hope to add one more for a total of three.