UPDATES TO THIS BATCH:
The entire front end has been redesigned and is way more beefy.  The camera plates are 2mm thick.

NOTE TO BATCH 1 USERS:
If you want to update your front end to the new more robust front end, you will need all body parts.  Not just the front end.


The idea behind this design is balance. Not weight balance, but a balance of features:

In addition to those, there are two key features that were the main focus.

The structure of this design is such that the main deck assembly is self-sufficient. It’s currently common to use the top plate as a structural element so that the main deck can be reduced in weight. While this still works great, it relies on a number of spaced out joints for structural integrity. If you pull those joints closer together, your structural integrity will improve. This is the same reason why shorter standoffs are more durable in a crash. The structure of the Prototype 5 is designed to pull all the structural elements as close together as possible to create a deck that is rigid, but more importantly cross braced against itself to help manage forces and vibrations. This probably sounds like a bunch of mumbo-jumbo but when you hold it in your hand, you immediately understand and it feels right. Hauling a GoPro around is an annoying necessity. One of the biggest annoyances is getting the props out of the camera view at low camera tilt without destroying flight performance. In order to achieve this, most designs either have a super tall build height, move the camera way way forward or the frame is enormous and the GoPro sits between the front blades. Any of these methods will significantly compromise weight, weight distribution and control performance. But it is what it is, no? While it definitely is what it is, with this design we’ve carefully positioned the GoPro as close to the CG as possible such that you will get a bit of prop in view at low 20deg GoPro Hero angles but after software stabilization, there ‘should’ be no props in view. This doesn’t immediately seem like a big deal but the resulting performance of the quad in such a small package speaks for itself. This design was drawn up in 2019 in anticipation of the future electronics we have today. The design has not yet been broadly tested by a large audience yet. Typically, our frames go through initial design and testing, then several prototype batches where copious amounts of feedback are collected and considered. Adjustments are made if necessary and the frame becomes more complete then gets a name. The future adjusted parts will stay compatible with the current parts as well and prototype batches are discounted too.

There is one annoyance with this frame we must point out up front. It uses press-nuts for everything which is much simpler but if you’re using a 20x20 stack, you cannot just replace an arm by undoing the two arm screws. You must loosen two other arm screws to pop the arm out. If using the Whoop pattern or 30x30, this isn’t an issue. Annoying but not a big deal because it only takes an extra couple seconds.

The actual carbon frame itself is flying great, super solid. The silver press nuts provided are trash, use the seperatly provided black ones. Only problem is there aren't enough black ones for your GoPro mount so.... Good luck on that one I guess... Currently I'm using poorly seated silver ones for my go pro, meaning I strip the threads off any hardware I use for the mount. Eventually the press nuts will be totally stripped so hopefully Bob can get me more black ones soon.

I'm confident the final version will be a "five star frame" but, as shipped, the frame I got showed up with 4 star quality because of hardware problems. Would also really prefer that the pressnuts came pre-installed. My source one had them pre-installed. My toothpick top plate had them pre-installed, having the user do it really complicates the build, especially when they are defective. Also, for a frame of this quality, sort of expected chamfered carbon, but that isn't a deal breaker.

That said, I am thinking this (and the eventual production version) will be my ride for the foreseeable future. Flies like a dream. 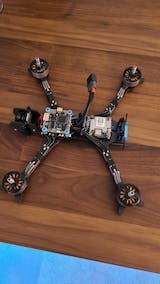 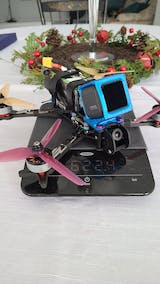 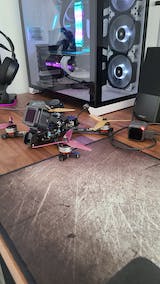 This is my new favorite and need more. Very strong and well thought out nothing unnecessary, easy to work on and change arms if you do ever break one they are thick also great camera protection for the expensive Dji system!!!

This frame is very well thought out and easy to build. The frame gives multiple build options and very user friendly . can not say more its just a great design!!! Great work

M
M.D.
My Number One Frame

My previous favorite frame was the Fouride 5". The Fouride has amazing performance with the 2203 motors, but it's not designed around the weight of a full size GoPro. The Prototype 5 with the new 5" motors works particularly well, even with the weight of a GoPro. Design, quality, ease of building, and durability are all top notch.

I have the batch 1 frame and I like it. Just like it says in the description it has a balance of features which is why I like it so much. I have mine built up with a 30x30 stack, a vista w/ nebula pro and imperial motors. 637 grams with a 1000mAh 6s battery and session 5. Rips!!